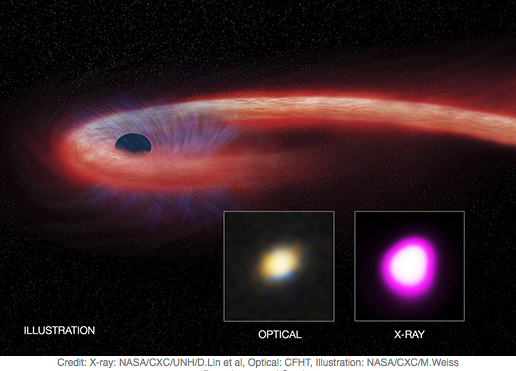 Astrophysicists used NASA’s Chandra X-ray Observatory and Swift satellite as well as ESA’s XMM-Newton to discover a giant black hole ripping apart a star and its remains for about a decade. This is the longest by far observation of a star’s death by a black hole.

The phenomenon that astronomers detected is called tidal disruption event and takes place when the huge gravity of a black hole tears apart objects that wander too close to it. As matter travels towards the black hole, heats up to millions of degrees and generates X-rays.

The X-ray source containing this black hole is located in a small galaxy about 1.8 billion light years from Earth. Further analysis of the phenomenon showed that supermassive black holes (SMBHs) can grow via these events, at extremely high rates which could explain how SMBHs were able to reach masses of about a billion times higher than the sun when the universe was only about a billion years old. Astronomers also used models to predict that the feeding supply of the black hole should be significantly reduced in the next decade, thus making the X-ray source fade in brightness over the next years.