The three-dimensional visualization of Eta Carinae, a massive star that had an enormous eruption observed in the 1840s, is based upon multiwavelength data from Chandra, Hubble, and Spitzer. Data from each set of different wavelengths of light reveal different structures and provide more information about the outbursts of Eta Carinae and structures that exist today. Since its launch in 1999, Chandra has observed Eta Carinae multiple times to investigate more about it through the X-rays it generates. The visualization is presented by the AstroViz Project of NASA’s Universe of Learning.

What will be the next star in our Milky Way galaxy to explode as a supernova? Astronomers aren’t certain, but one candidate is in Eta Carinae, a volatile system containing two massive stars that closely orbit each other. This image has three types of light: optical data from Hubble (appearing as white), ultraviolet (cyan) from Hubble, and X-rays from Chandra (appearing as purple emission). The previous eruptions of this star have resulted in a ring of hot, X-ray emitting gas about 2.3 light years in diameter surrounding these two stars. 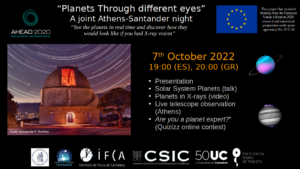