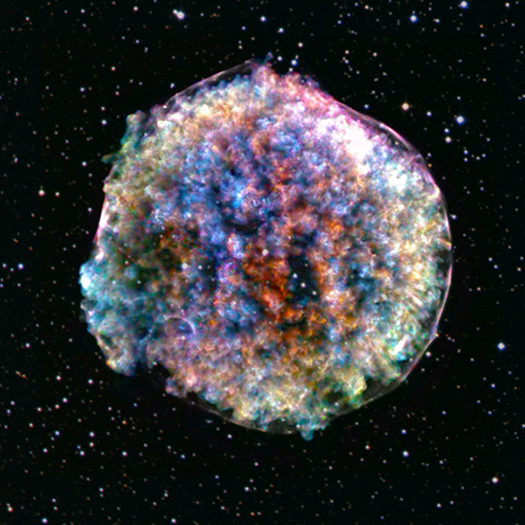 In 1572, Danish astronomer Tycho Brahe was among those who noticed a new bright object in the constellation Cassiopeia. Adding fuel to the intellectual fire that Copernicus started, Tycho showed this “new star” was far beyond the Moon, and that it was possible for the universe beyond the Sun and planets to change.

Astronomers now know that Tycho’s new star was not new at all. Rather it signaled the death of a star in a supernova, an explosion so bright that it can outshine the light from an entire galaxy. This particular supernova was a Type Ia, which occurs when a white dwarf star pulls material from, or merges with, a nearby companion star until a violent explosion is triggered. The white dwarf star is obliterated, sending its debris hurtling into space.

In modern times, astronomers have observed the debris field from this explosion – what is now known as Tycho’s supernova remnant – with many telescopes including the Chandra X-ray Observatory. Since much of the material being flung out from the shattered star has been heated by shock waves – similar to sonic booms from supersonic planes – passing through it, the remnant glows strongly in X-ray light.

Astronomers used Chandra observations from 2000 through 2015 to create the longest movie of the Tycho remnant’s X-ray evolution over time – the first such movie of Tycho ever made. This movie shows that the expansion from the explosion is still continuing about 450 years after Tycho Brahe and others witnessed the event.

By combining the X-ray data with some 30 years of observations in radio waves with the VLA, also producing a movie, astronomers have used these data to learn new things about this supernova and its remnant.