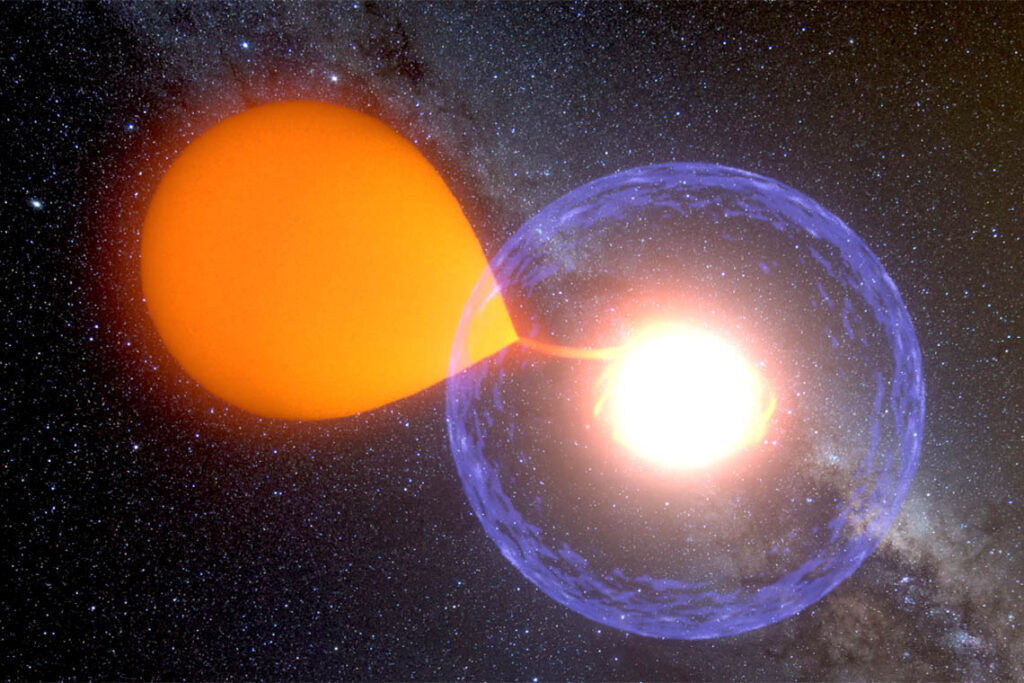 In 2018, astronomers observed in high resolution a nova explosion with three different space telescopes: NASA’s Fermi and NuSTAR space telescopes, as well as the Canadian BRITE-Toronto nano-satellite, and they have captured the first direct evidence that most of the visible light produced during the outburst arose from shock waves — abrupt changes of pressure and temperature formed in the explosion debris.

A nova is a transient astronomical event that causes the sudden appearance of a bright, apparently “new” star, that slowly fades over several weeks or many months. Causes of the dramatic appearance of a nova vary, depending on the circumstances of the two progenitor stars. All observed novae involve a white dwarf in a close binary system. It occurs when a stream of hydrogen from a companion star flows onto the surface of a white dwarf, a compact stellar cinder not much larger than Earth. When the orbital period falls in the range of several days to one day, the white dwarf is close enough to its companion star to start drawing accreted matter onto the surface of the white dwarf, which creates a dense but shallow atmosphere. This atmosphere, mostly consisting of hydrogen, is thermally heated by the hot white dwarf and eventually reaches a critical temperature causing ignition of rapid runaway fusion.

The sudden increase in energy expels the atmosphere into interstellar space creating the envelope seen as visible light during the nova event and previously mistaken as a “new” star. As the explosion begins, it ejects a cooler, slower wave of gaseous material, relatively speaking. Behind it, though, is a hot, fast wave speeding right behind it. The collision of the two ejections produces a shock wave, which results in a spectacular explosion of heat and light. The 2018 outburst originated from a binary star system called V906 Carinae, which lies about 13,000 light-years away in the constellation Carina. V906 Carinae was one of these classical novae.

Fermi gamma-ray telescope detected its first nova in 2010 and has observed 14 to date. Gamma rays the highest-energy form of light require processes that accelerate subatomic particles to extreme energies, which happens in shock waves. When these particles interact with each other and with other matter, they produce gamma rays. Because the gamma-rays appear at about the same time as a nova’s peak in visible light, astronomers concluded that shock waves play a more fundamental role in the explosion and its aftermath. The Fermi gamma-ray and BRITE-Toronto optical data show flares in both wavelengths at about the same time, so they must share the same source shock waves in the fast-moving debris.

“BRITE-Toronto revealed eight brief flares that fired up around the time the nova reached its peak, each one nearly doubling the nova’s brightness,” said co-author Kirill Sokolovsky at Michigan State. “We’ve seen hints of this behavior in ground-based measurements, but never so clearly. Usually we monitor novae from the ground with many fewer observations and often with large gaps, which has the effect of hiding short-term changes.”

Observations of one flare in X-rays using NASA’s NuSTAR space telescope showed a much lower level of X-rays compared to the higher-energy Fermi data, likely because the nova ejecta absorbed most of the X-rays. High-energy light from the shock waves was repeatedly absorbed and reradiated at lower energies within the nova debris, ultimately only escaping at visible wavelengths.

Astronomers have proposed shock waves as a way to explain the power radiated by various kinds of short-lived events, such as stellar mergers, supernovae — the much bigger blasts associated with the destruction of stars — and tidal disruption events, where black holes shred passing stars. Further studies of nearby novae will serve as laboratories for better understanding the roles shock waves play in other more powerful and more distant events.

This work led by Dr.Elias Aydi was published in Nature Astronomy in 13th April 2020 with the title:”Direct evidence for shock-powered optical emission in a nova”.