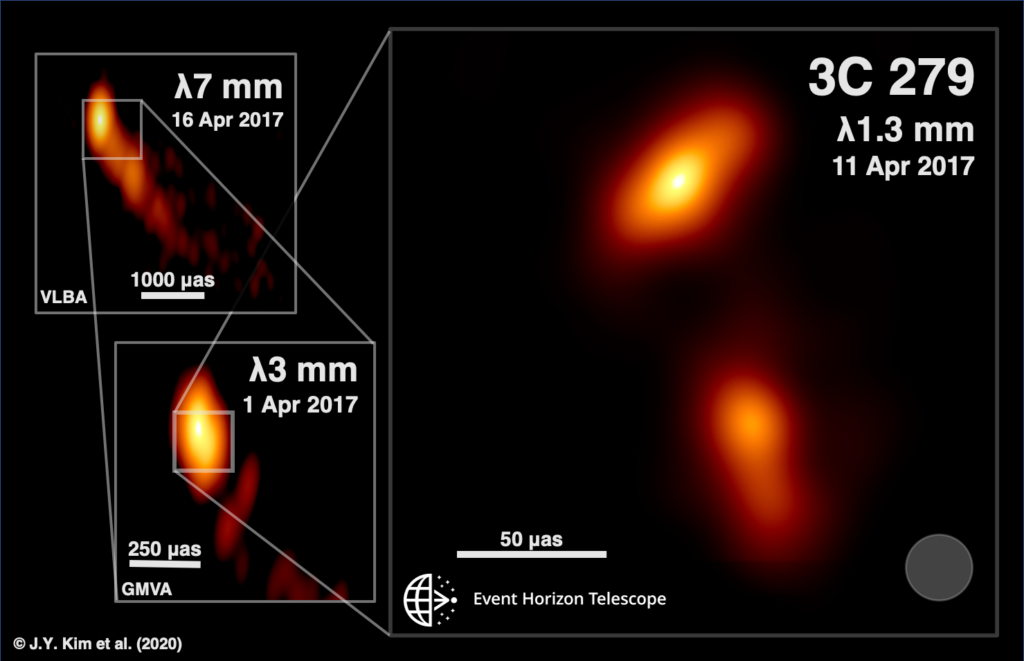 A year ago, the Event Horizon Telescope (EHT) Collaboration observed for the first time the supermassive black hole at the center of the nearby radio galaxy M87, finding the dark central shadow that was in agreement with General Relativity, further demonstrating the power of this 100 year-old theory. This time, they came back with a new image of the distant quasar 3C 279: they observed in great detail for the first time a jet produced by a supermassive black hole.

Around 10% of the Active Galactic Nuclei (galaxies that host an active super-massive black hole in their center) have relativistic outflows (aka the jets) at which hot electrons (plasma) move with incredibly high velocities reaching the speed of light. The material that falls into the black hole creates an accretion disc which is highly conducting and it produces a magnetic field as it rotates around the black hole. The changing magnetic field creates strong electric field capable of accelerating charged particles and boost them from the central engine creating two jets vertical to the level of the accretion disc at two opposite directions. 3C 279 with a distance of almsot 5.5 billion light-years from Earth belongs to quasars, a category of Active Galactic Nuclei, which produces these bursting jets. EHT was able to resolve them in unprecedented detail, tracing it all the way down to the accretion disk.

In previous images of 3C 279, scientists were able to detect only the outline of the jet coming towards us, while the one moving in the opposite direction was not detected. But in the new EHT picture, they resolved details very close to the point where this jet leaves the black hole. Interestingly, this base area seemed twisted and somewhat offset from the main axis of the jet.

“It’s curious, we’re seeing a region that’s actually pretty close to the black hole. It could be an interaction layer where the jet couples to the accretion disc and extracts all of its energy from the black hole. We don’t really understand how jets are powered by black holes. Black holes, when they rotate rapidly, are the most efficient liberators of energy in the Universe, but the mechanism by which the jet can extract that energy is unknown. There are a few ideas, but we’re not sure yet which one is the right one.” said EHT Collaboration member Dr. Ziri Younsi in an interview to the BBC News.

This work, led by Jae-Young Kim from the Max Planck Institute for Radio Astronomy (MPIfR) in Bonn, was published this month in the journal Astronomy & Astrophysics: https://www.aanda.org/articles/aa/abs/forth/aa37493-20/aa37493-20.html
Source: BBC news