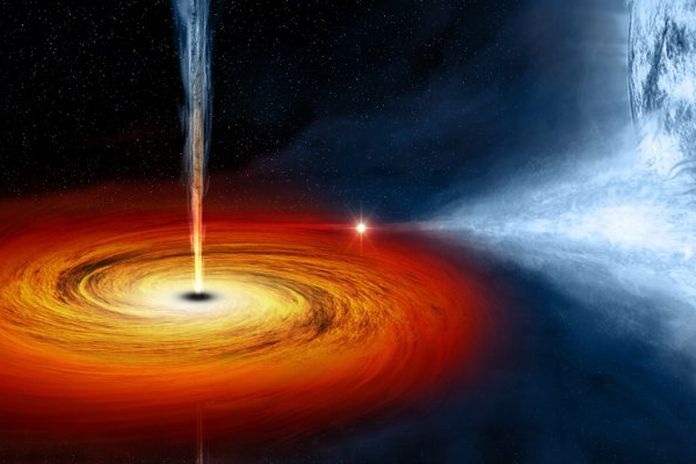 An artistic view of a star tearing apart by a black hole. Image credit: NASA.

Astronomers solved the mystery and found the perpetrator, an intermediate-mass black hole that was caught in action tearing apart a star that just happened to be too close. It was the first time researchers found such strong evidence of this elusive type of black holes.

Intermediate-mass black holes (IMBH) is a class of black holes with mass 100 up to 100 thousands times the mass of the Sun. This is much more than the stellar black holes but less than the super-massive black holes (millions up to 1 billion of Solar masses). In general, there are three formation scenarios for IMBHs: 1) merging of stellar mass black holes, 2) collision of massive stars in dense stellar clusters and 3) they are primordial black holes formed in the Big Bang. These mediun-size objects are a long-sought missing link in black hole evolution.

Astronomers used two X-ray observatories and one optical telescope to find this IMBH. In 2006, Nasa’s orbiting Chandra X-ray Observatory and the European Space Agency’s XMM-Newton satellite detected a powerful X-ray flare with the name 3XMM J215022.4−055108. Scientists attributed this flare to a star tearing apart from a very massive object, such as a black hole. Interestingly though, this object was not in the center of a galaxy, where usually massive black holes redise. In order to precisely find the location of this object, they used data from the Hubble Space Telescope. Indeed, this object was not in our own galaxy, the Milky Way, but also not in the center of any other galaxy. Its actual position was found instead in a distant, dense star cluster at the edges of a galaxy named 6dFGS gJ215022.2-055059, a place where Astronomers expect to find IMBHs. Using the X-ray glow from the shredded star, they were able to estimate the black hole’s mass at 50,000 times the mass of the Sun.

This work was published in March, 2020 in The Astrophysical journal with the title: “Multiwavelength Follow-up of the Hyperluminous Intermediate-mass Black Hole Candidate 3XMM J215022.4−055108”. The led author was Dr. Dacheng Lin, from the Space Science Center, University of New Hampshire, Durham, in the United States. A pre-print of this paper can be found in: https://arxiv.org/pdf/2002.04618.pdf