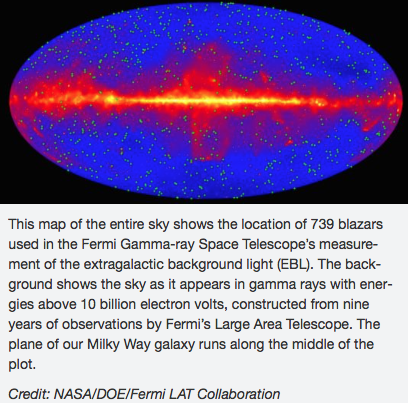 Scientists used the Fermi telescope to measure the entire amount of starlight ever emitted! The Fermi Gamma-ray Space Telescope was launched into low orbit on June 11, 2008. It collects data from gamma rays, the most energetic form of light!

To measure the starlight, astronomers analysed data atom 739 blazars. Blazars are galaxies that contain an active supermassive black hole which releases jets of energetic particles. These jets travel across the universe at nearly the speed of light! During their journey they interact with the extragalactic background light, a cosmic fog that is composed of light emitted by stars and from dust in their vicinity. This interaction leaves an observable imprint. By measuring how thick this fog is as a function of time, the team of astronomers managed to measure the total starlight at different time periods, all the way back when stars were first formed.

According to the measurement, the number of photons (particles of visible light) that escaped into space after being emitted by stars translates to 4×1084!! This is 4 followed by 84 zeros!!! However, most of the light that reaches Earth comes from our sun and Galaxy. The rest of the starlight is equivalent to a 60-watt light bulb viewed from a distance of about 4 kilometres. This is why the sky is dark at night. The vastness of the universe and its finite age makes the starlight extremely dim!!

This work will provide a guideline to future missions, like the James Webb Space Telescope, which will be launched in 2021, to explore the earliest days of stellar evolution and allow scientists to study the formation of primordial galaxies!!

Why is the sky dark at night (Olbers’ Paradox)?